Annual meeting of The DARING 2020 program: “Even in a time of crisis business development is possible for daring entrepreneurs!” 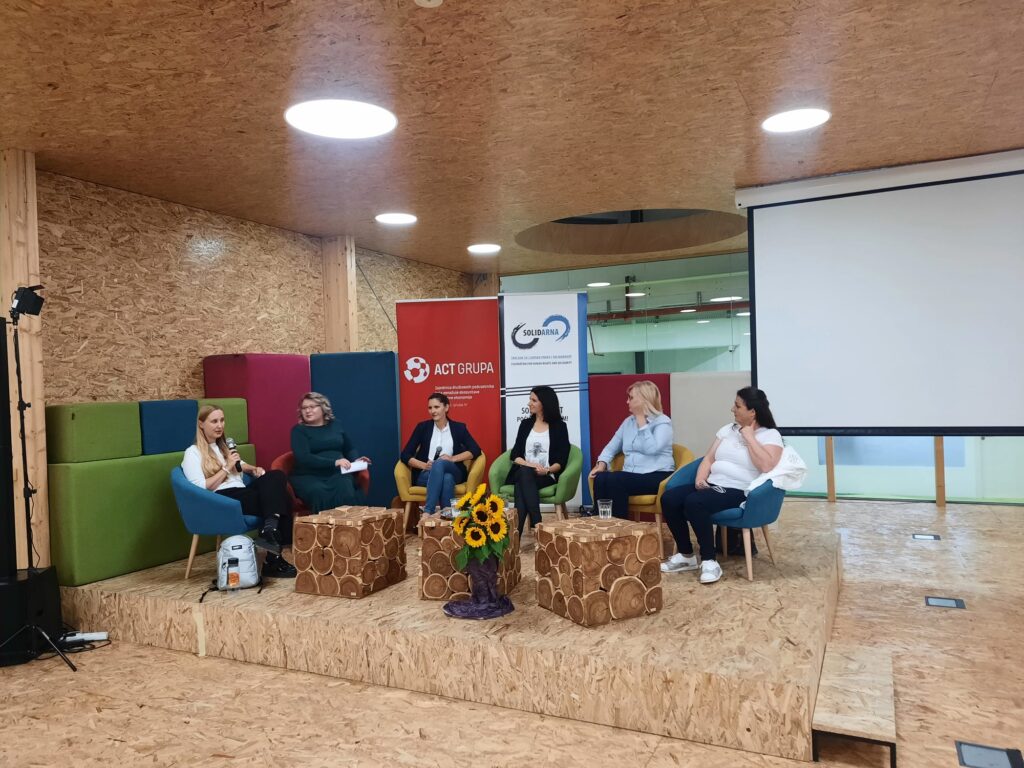 That business development is possible for courageous women entrepreneurs even in times of crisis was shown by “Brave talks in times of crisis: women’s entrepreneurial successes and challenges”, the annual meeting of the DARING Economic Empowerment Program, launched by IKEA in cooperation with the SOLIDARNA Foundation and the Croatian Business Council for Sustainable Development (HR PSOR), with the expert support of ACT Group.

The annual meeting of The DARING 2020 gathered 40 entrepreneurs and experts at the Zagreb Innovation Center ZICER, and the debate was moderated by the main mentor of the program, Ana Brigović from ACT Group.

With the support of The DARING, the social enterprise  Sustainable Society from Gračac expanded the production of custom-made anatomical work footwear during the crisis in 2020, while the family women’s business Fabijanović from Brač also strengthened the market placement of the unique female baby product Dada & Rocco. Organica Vita from the village of Čađavice has strengthened the organic production and processing of medicinal plants and oilseeds by purchasing equipment and HACCP certification, while the bio cosmetic company from the Šibenik hinterland Primitivance has just launched its new 100% organic perfume on the international market.

With the mentoring support of the DARING, two women’s start-ups also experienced a business leap – the project “Biljkoborci” of the Opet Nija company again and the “Ćiri biri bajka” of the Pixing trade from Zagreb.

Mateja Horvat, the owner of the world’s first online school for Croatian as a foreign language SpeakCRO, showed by her own courage that female solidarity goes hand in hand with courageous growth: “With the support of the DARING, the volume of our work grew by 23%. We are now in a situation where we can give back to the community and support other brave women in the form of two scholarships for a year-round individualized Croatian learning program that we give to asylum seekers in Croatia. ”

Violeta Simeonova Staničić, on behalf of the European Parliament Office in Zagreb, emphasized the importance of professional and financial support to women in entrepreneurship through programs such as the DARING:

“ Although there are more women in Europe than men, women make up only a third of the self-employed in the EU, and they are at the head of only 1/3 of all companies in the European Union and only 1/5 in Croatia. Forbes reported that only 25% of women entrepreneurs seek funding for their business, compared to 34% of men. Women have reason to feel skeptical about seeking this financial support: they are less likely to receive it. When women are granted a loan, it is a third less than what entrepreneurs usually get. Women’s creativity and entrepreneurial potential are underutilized sources of economic growth and jobs and need to be further developed. The European Union is socially sensitive and recognizes this problem and is making a special effort to encourage the inclusion of vulnerable social groups in the labor market. ”

Gordan Vrankovečki, IKEA’s Sustainability Manager, explained the motivation of the DARING starters: “We at IKEA believe in equality. The problems that women face are not just women’s problems. These are the problems of the whole society. When we look at global research, some show that only about 20% of start-ups are run by women. Do you know what the most important reason for this is? “Women generally get less investor money, and that’s just because they’re women.”

The DARING program has been operating for two years and has so far supported 13 women’s companies in the for-profit and non-profit sectors. The DARING project is a joint venture of a wide range of organizations from all sectors, including the Office of the Gender Equality Ombudsman, the Office of the European Parliament in Croatia, Erste Bank, the Croatian Bank for Reconstruction and Development (HBOR), EBRD Support to Small Businesses in Croatia. consulting company Apsolon, Women in Adria, Raiffeisenbank Croatia, and the Croatian Chamber of Trades and Crafts – HOK.