You are not alone – come along with us! 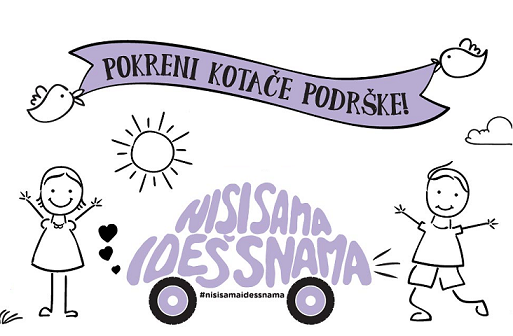 In March 2018, the SOLIDARNA Foundation, in cooperation with the We Are Not Alone Association, launched an educational-philanthropic campaign “You are not alone – come along with us!”

During the one-month duration of the educational-philanthropic crowdfunding campaign, HRK 120,573.46 (EUR 15,930.55) was raised for financing at least 1,200 free two-way taxi rides to the hospital and back for women with cancer during chemotherapy in the city of Zagreb.

More than 1000 donors joined the fundraising, including the students of the Voćin Elementary School who raised 2,420.00 HRK, and the students of the Zagreb Medical Faculty raised almost 8,000.00 HRK as part of their ball. Strong support for the project, both financial and organizational, was provided by the City of Zagreb.

We remind you that the project and campaign were prompted by the results of research by the SOLIDARNA Foundation and the We Are Not Alone Association on the problems and needs of women with cancer, which showed that one in four women receiving chemotherapy in Zagreb hospitals have no transport to and from the hospital. They mostly travel by public transport because they cannot pay for taxis, and at the same time, they all feel bad about the effect of chemotherapy.

The project “You are not alone – come along with us!” is realized with the support of the SOLIDARNA Foundation, and under the auspices of the City of Zagreb and numerous partners, including the Adris Foundation, Radio Taxi Zagreb, dm-drogerie markt, water Cetina, Volunteer Center Zagreb, SDF Women’s Initiative, designer Gordana Golik, Television Student, Fraktura publishing houses, VBZ, Školska knjiga, Profil and Aurora cosmetics, SAN natural cosmetics and Studio Do Yoga.

The association “We are not alone” has launched a permanent service of free transport to and from chemotherapy, and women, if they need transportation and an escort, should contact the association via e-mail info@nismosame.com.