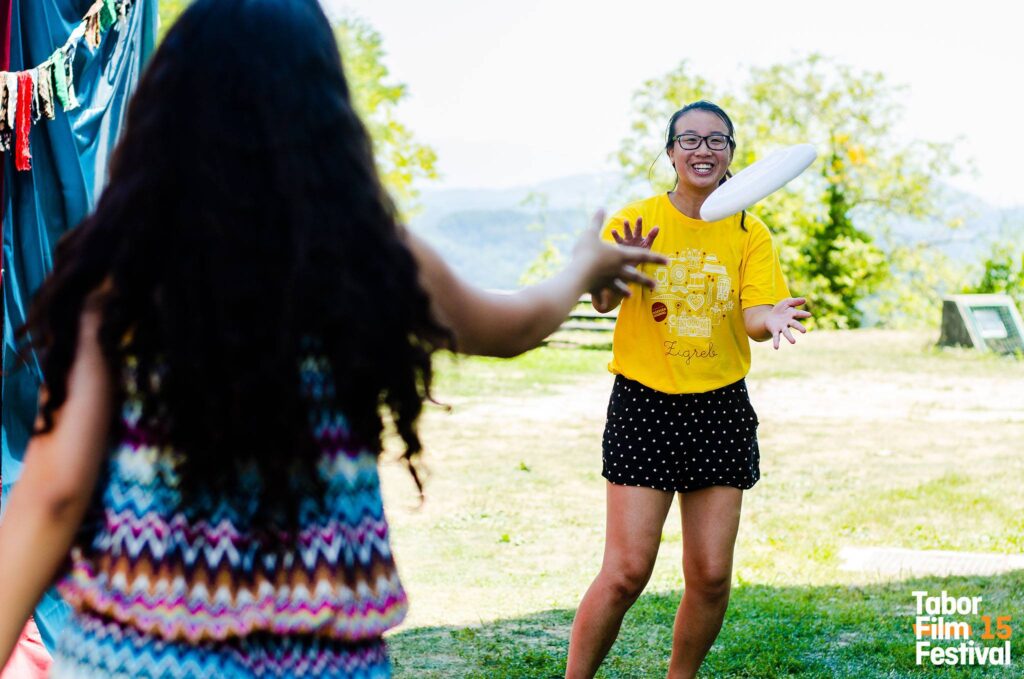 Read how our volunteer for US,Kimberly Truong, has experienced Tabor Film Festival, how has she managed and what she has personally gained.

The 15th Tabor Film Festival took place on the long weekend of July 6th to the 10th. In the evening, the old castle hosted short films to compete in domestic and international competitions. Shortly after, bands from Croatia and other areas began the daily parties with their lively concerts. Colorful tents surrounded the castle grounds, and small groups chattered until the early morning to enjoy the weekend’s festival fun.

I came to Croatia from the US for a little less than two months as a summer intern for GONG and SOLIDARNA, which are political and human rights advocacy non-profit organizations based in Zagreb. I study Sociology at the University of Michigan back in the US, and I am astounded by the constant and wide-reaching involvement that Croatian non-governmental organizations display. This weekend served as a great example of this. I was invited to the Tabor Film Festival by SOLIDARNA, which sponsored the event as part of their Good Hosts campaign that supports creative youth without homes. This project partners with refugee assistance NGOs such as Are You Syrious?, Okus Doma (Taste of Home), Initiative Welcome, and Coalition of Solidarity Split. The organizations served as good hosts for the festival by providing mobile phone charging stations, a kindergarten tent where parents could have their children play at, and meals cooked by Okus Doma. An African drumming performance and henna tattooing were direct displays of creative practice from refugees who were supported by the Good Hosts campaign. In addition, the Good Hosts campaign screened seven movies and spectacularly ended the festival with the concert of Kries as the grand finale.

I worked as a volunteer at the table and kindergarten for the weekend, and I found that my work included much more learning and fun than I had initially expected. The most memorable group that I met was a family from Iran who were placed in Croatia one year ago. They were made up of a mother and her three daughters between the ages of 15 and 6. We became great friends through late night talking in the tents, playing Magarac with frisbees, going through about 100 water balloons, and so much more. At first, I felt strange because I didn’t have much experience with playing with children, but we all made the weekend fun. My conversations and time with the family were so valuable for building my understanding of Iranian policies and the experience of refugees in Europe. My weekend with them made me reflect on my parent’s refugee experience from Vietnam, and I often to spoke to the mother and her daughters about the common issues and experiences we face as first and second-generation immigrants. I am so grateful for the Tabor Film Festival and the refugee organizations for making this valuable friendship possible.

The Tabor Film Festival was a great event on its own, but its events were amplified by its good hosts. By being able to camp, talk, and work with other volunteers and NGO supervisors, I left Tabor with much more than a few short films under my belt. Please consider donating or volunteering with these amazing organizations to help a great cause!

Any cookies that may not be particularly necessary for the website to function and is used specifically to collect user personal data via analytics, ads, other embedded contents are termed as non-necessary cookies. It is mandatory to procure user consent prior to running these cookies on your website.